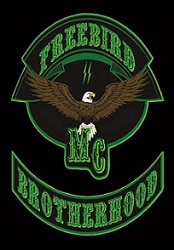 FRIENDS: club affiliation consists of individuals who have made contact with the club, through a friendship or acquaintance with a full patch member, but have not announced an intention of prospecting for future membership. Friends of the club may decide to join the club on rides or attend other club functions and may do this on a very frequent or infrequent basis. The key distinction is that they have not expressed any intent to join the club. A friend of the club may be a motorcycle rider, though this is not necessary. Friends of the club wear no official club “colors” or patches. A friend of the club may eventually want to prospect with the club at some time in the future. Friends of the club should understand that the FREEBIRD BROTHERHOOD  respects all patch clubs  and with this individuals have the responsibility to not do anything while associated with the club that would bring embarrassment or dishonor to FREEBIRD MC, or any other club

HANGAROUND: club affiliation consists of individuals who have stated that they are interested in prospecting with the club but have not either formally announced their desire to prospect yet or have simply not been presented to the club for a vote on their prospect status yet. The “hangaround period” may vary from person to person. It is also possible for one to go from being a hangaround to being a friend of the club or from being a hangaround to becoming a prospect. The former would usually occur when the person, after hanging around the club for a while, decided they are no longer interested in joining but still wanted to join in on club rides or events. Anyone who wants to prospect for the club must go through some hangaround period first. The hangaround period is a relatively informal time for someone who is interested in the club to spend some time with club members, go on some club rides, etc. It is also a time for the person to get a feel for how much they fit with the Brotherhood. It’s also a time for the club to engage in the same evaluation process with regard to the hangaround. A hangaround will usually be a individual with their own bike. This however, will not always be the case and is not absolutely necessary.

PROSPECT: is an individual who has stated a clear intention of being a full patch member of the club. He has also been voted in by the full membership and has a full patch sponsor.  Everyone prospects in, no exceptions. A prospect must be voted in by the full patch members of the club to become a full patch member. MANY prospects will fail to earn their patch. Some will realize during their prospecting period that the club is not for them. For others, the club will realize that the prospect is not a good fit for the club. The prospect level of club affiliation is the first level that includes a clearly stated obligation to attend a certain number of rides, meetings and events of the club. While a prospect has no voting privileges, they are considered a “member” of the club in more defined ways than a friend of the club or a hangaround. A prospect is expected to follow the biker protocol. A prospect must have their own bike.